When the newest edition of the Ann Arbor city council convenes its first regular meeting after the Nov. 6 elections, four out of 11 people at the table will have no experience as councilmembers. First-timers on the council are Jeff Hayner (Ward 1), Kathy Griswold (Ward 2), Elizabeth Nelson (Ward 4), and Ali Ramlawi (Ward 5).

But Ann Arbor’s system of two council representatives from each ward, who are chosen in alternating elections, ensures a certain baseline level of experience on the council. 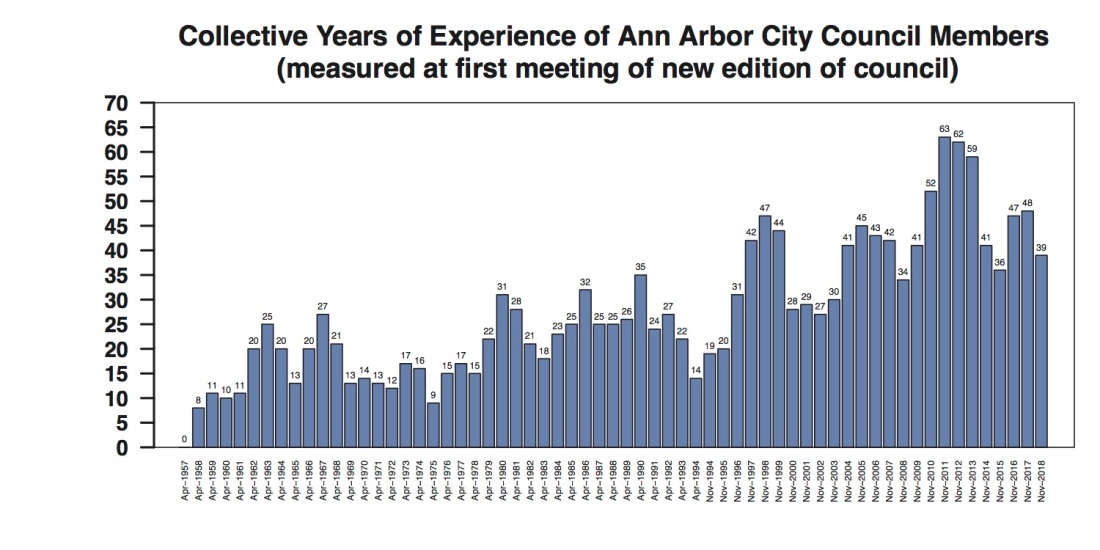 On that analysis, service is counted even if it was interrupted. Jane Lumm (Ward 2) served six years in the 1990s as a Republican before being elected in 2011 as a candidate unaffiliated with any party. Lumm’s 13 years of service make her the longest-serving current member of the council.

Next Monday’s first meeting of the new council will include the choice of a mayor pro tem. Based on the Democrat-controlled council’s past practice, the councilmember who is the longest-serving Democrat will be chosen for the mayor pro tem post. Chuck Warpehoski’s departure from the council—he lost his primary race to Ramlawi—leaves Jack Eaton (Ward 4) as the apparent choice for mayor pro tem.

Eaton has served on the council for five years, which is more than any other Democrat on the council besides the mayor. Julie Grand (Ward 3) has served four years; Zachary Ackerman (Ward 3) and Chip Smith (Ward 5) have each served three years; Anne Bannister has served a year.

Christopher Taylor’s service as mayor, who is a member of the council under the city charter, now spans four years. But his service on the council started a decade ago in 2008, which adds another six, for a total of 10 years.

The November 2008 edition of the council, when Taylor was a newly elected member representing Ward 3, was experience-wise statistically similar to the upcoming 2018 edition.

First, the number of new councilmembers in 2008 was four just like this year. A difference between this year’s newcomers and those of a decade ago is the kind of races they won. This year, three out of the four wins by newcomers came in races contested by incumbents. (In Ward 1, the incumbent, Sumi Kailasapathy,  did not seek re-election.)  In 2008, only one of the four newcomers won a race against an incumbent.

Ten years ago, the Ward 1 incumbent, Ron Suarez, withdrew, but not in time to remove his name from the ballot. In Wards 2 and 5, incumbents Joan Lowenstein and Chris Easthope sought election to district judge, instead of the city council. But in Ward 3, Taylor’s challenge of incumbent Stephen Kunselman was successful. The newcomer class of 2008 was Taylor, Sandi Smith (Ward 1), Tony Derezinski (Ward 2), and Carsten Hohnke (Ward 5).

Second, the total experience on the council in 2008 was 33 years, which is six less than this year, but about the same percentile (around the 70th), measured against the councils of the last six decades.

Third, the mayor in 2018 has about the same amount of council experience as the mayor did in 2008. Taylor’s 10 years of experience is one more year than Mayor John Hieftje had on the council in 2008. A difference between Taylor in 2018 and Hieftje in 2008 is their experience as mayor—four years for Taylor and eight for Hieftje.

Even if the 2018 edition of the council has a lot of experience measured against six decades of previous councils, this year is a clear “trough” in the regular crest-trough pattern of the last couple of decades. Among the councils since 1995, the 2018 edition’s collective experience puts it around the 35th percentile.

Looking ahead, cumulative experience on the city council will get an automatic boost of 11 years every other year—barring resignations, recalls or deaths in office. That’s because Ann Arbor voters approved a city charter amendment in 2016 that replaced the two-year terms for councilmembers (including the mayor) with four year terms, starting in 2018. So in odd-numbered years no council elections will be held.

The automatic  11-year boost in odd-numbered years won’t necessarily result in councils with more overall experience than Ann Arbor has seen in the last 60 years. A four-year term is long enough that councilmembers who, after their first term, are grappling with a decision  to seek re-election might not so easily opt for another one. And four years is long enough for councilmembers to provoke enough dissatisfaction among their constituents that their re-election is challenged by one or more opponents.

But the minimum baseline experience of a future council will increase with four-year terms. Two-year terms guarantee at least five years of collective experience, even in a year that sees complete turnover for five seats and the mayor. The following year, however, adds just the one extra year’s experience of the mayor for a total of at least six years of experience.

Four-year terms guarantee at least 10 years of collective experience, even in a year when five councilmembers and the mayor are not re-elected. The following year, when no elections are held, would add 11 more years of experience to the council for a minimum of 21 years.

The coarse analysis of council experience in this note started with the chart of council membership available on Arbor Wiki. The most recent few years had to be added.

GoogleSheets was the software used for the counting of years of experience—specifically COUNTIF.

The approach was kind of a kludge: For a name in a cell, count the number of instances of that person’s name anywhere else in the spreadsheet in a row beneath that cell—that’s the person’s years of experience for that cell. For that kludge to work, some of the information had to be stripped out or cleaned up. Party affiliation was stripped out, so that Marcia Higgins and Jane Lumm’s experience as Republicans was not undercounted. Editions of the council in the table corresponding to mid-year appointments to fill vacancies due to resignation were stripped out so that experience was not over-counted. And an attempt was made to standardize inclusion of middle initials for councilmembers.

View all posts by Dave Askins