Based on data from the Michigan Department of Transportation, 113,783 passengers got on and off Amtrak trains at the Ann Arbor station in the first three quarters of this year. That’s about 5,000 more riders than last year’s nine-month total of 108,327.

In 2017 the full-year ridership total was 150,176—which was the highest number recorded over the last roughly quarter century.  It narrowly eclipsed ridership for 2013, which was 149,520.

So 2018 could be a record-setting year for ridership at Ann Arbor’s Amtrak station, if the numbers in the final three months of the year maintain the same pace. The nine-month total this year is not quite as high as the total for the same period in 2013—which was the previous record year before it was broken in 2017. Ridership slipped in October and November of 2013. 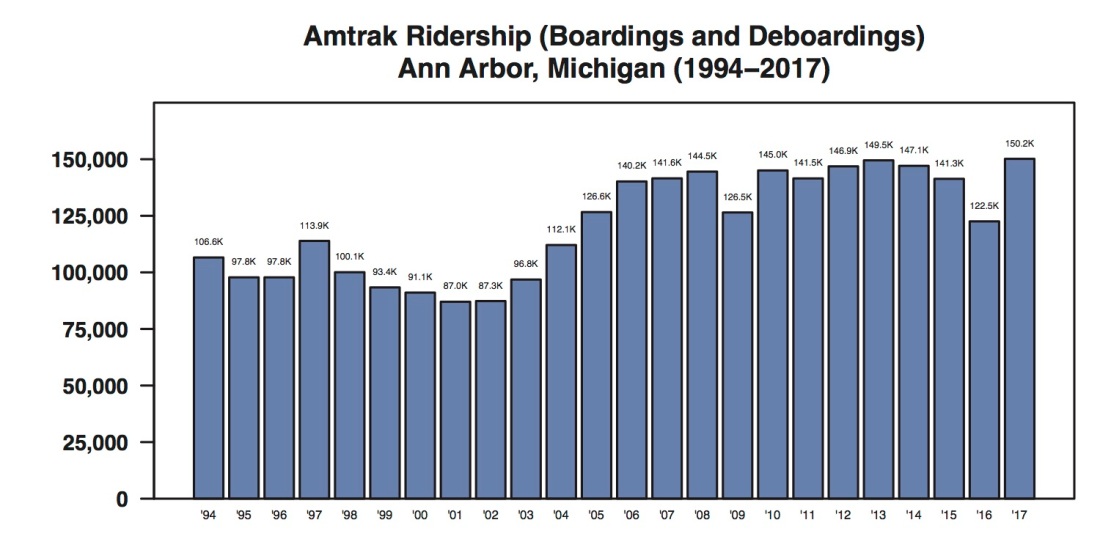 The 2017 record came after a year that saw annual ridership dip to levels not seen since 2004 and 2005. The drop in 2016 was abrupt and it has been analyzed as the impact of delays due to track improvements that were made that year.

Already in April of 2016 the monthly total reflected lower ridership than the most recent historical trend. From May through August, ridership remained lower. By September the numbers had started to recover, and by the end of  2016, ridership had returned to the higher levels of a few years earlier.

View all posts by Dave Askins